Race Report: Run for the Dream

Earlier this year I found myself getting talked into signing up for a race in Williamsburg, Virginia, that quite a few of my running friends were doing (granted, it didn't take a lot of convincing on their part). The race is called Run for the Dream and benefits a local school for disadvantaged kids and supports wounded warriors.  Then, as if the lure of running with friends through a historic place wasn't enough, the race director announced the Patriot's Challenge - where if you run both the 8K on Saturday and the Half of Sunday, you get a third medal!  And, since it's the year of bonus bling for many of us, you better believe we were on board!

Knowing I was under-trained for undertaking the challenge (longest run to date since RnR Dallas was 7 miles), and knowing that both courses were very hilly, my plan for the weekend was just to survive both races and get my bonus bling.  So Thursday evening after work, I hopped on a plane to Baltimore where I was meeting up with most of the group.  Friday morning we all carpooled down to Williamsburg.  After first stopping at Cracker Barrel for lunch, we went to the race expo where we got our bibs, shirts, backpacks, and complementary Colonial Williamsburg and Busch Gardens tickets - the schwag for this race was incredible!  After we signed up for the runner shuttles for Saturday and Sunday morning, we headed to the resort where we were staying for the weekend - J found a 3-bedroom condo that was perfect for the six of us girls!  We made a quick trip to Wal-Mart for some "necessities" and had an early dinner at Pizzeria Uno.  Before we knew it, it was time to organize our stuff for the 8K the next morning and hit the hay. 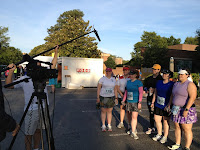 Saturday morning started out early, but not too early.  We got on our assigned shuttle and were at the starting line with plenty of time to spare.  In fact, as we were standing around looking fabulous in our SparkleSkirts, we attracted the attention of a video crew and they asked to interview us and tape a quick blurb about why we were there.  We were all in the same corral, so we lined up together and took off.  K & J took off early in the race, working for a PR for K for the 8K distance.   The rest of us leapfrogged each other for the first few miles, then eventually split out as we settled into our paces.  M and I were running together, taking it easy and trying to keep some in the tank for the half the next day.  As we were running down the main street of Colonial Williamsburg, we saw one of the women competing in the 80-85 division of the masters championship go down and hit her head - literally right in front of us.  A group of us stopped to help her, but the medical team arrived very swiftly, and we left them to do their thing and take care of her. (We were pleased to see her finishing later - she had a bandage on her head, but seemed to be in good spirits!)

The course continued through both Colonial Williamsburg and surrounding neighborhoods and into the campus of the College of William and Mary - it really was a pretty course.  The finish line was located inside the stadium on campus.  As we entered the stadium and started our lap around the track, volunteers handed us small American flags to carry as we finished - what a cool idea!  We ﻿﻿﻿﻿completed ﻿﻿﻿the 8K in a respectable 1:13:15.﻿﻿

It's nothing to write home about, but since this was my first 8K ever, I can say it was a PR!  After we got our medals, we headed to the post-race bash, where we got pulled pork sandwiches and beer!  Then back on the shuttle so we could go to the condo and get cleaned up. 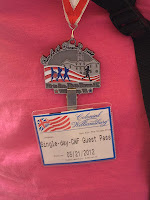 After showering, eating, and resting for a little bit, we left the condo again - this time to wander around Colonial Williamsburg - using the passes included in our race registration.  While this was really

fun and interesting, we realized very quickly that being on our feet for hours on end was definitely not the best idea before a half.  Dinner that evening included a second trip to Cracker Barrel (another not-so-great idea...anyone else noticing a trend here?).  After dinner it was back to the condo to organize our stuff for the half the next day.

Sunday morning came too early and we were all dragging.  Due to our poor race prep and over-extending ourselves doing other activities, no one was really "feeling it."  Motto of the morning was just to get it done and get our bonus bling.  Thank goodness it had a 4 hour time limit - I had a feeling we

might need every second of it.  After one of the best renditions of The Star Spangled Banner I've ever heard pre-race (sung by a kindergartener - yes, a kindergartener, every race should do that), we were off.  L wasn't doing the half, but had volunteered to be a course monitor on her bike (so we still got to see her a few times), and J was feeling pretty good, so she was actually going to try to run it like a normal race.  That left the other four of us, whose plan was, as M put it, "to start slow then back off."  And that's exactly what we did. 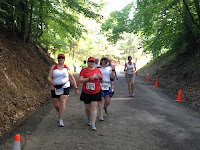 We started out with our run/walk intervals and a nice easy pace for the first 6 miles or so.  After that, the hills, humidity, and our poor race prep really caught up with us.  The intention was to walk for a bit and then re-start the intervals.  Ummm...yeah.  We

never re-started the intervals.  There was an out-and back section that took us out to an inlet with gorgeous scenery, but as we were going out, it was a little disheartening to know we'd have to traverse the same rolling hills on the way back.  However, we kept up pretty good attitudes and were having a good time just hanging out with each other and talking, and we also got to make some new friends!  We even survived the two named hills - now, for someone who comes from a relatively flat area of the country, named hills scare me - they're so bad someone actually gave them a NAME!!!

At some point (around mile 10 or 11), K and I pulled just the tiniest bit ahead of the others.  It definitely wasn't intentional - we had just found a comfortable pace and stride and knew that if we kept that up that we could make it to the finish ok.  As we neared the William & Mary campus again, churches were just letting out.  There was one small group outside a methodist church, dressed in their Sunday best, manning their own personal aid station.  There was a little boy handing out orange slices, which I didn't particularly need or want, but he was too cute to pass up, so I got one.  After another

quick tour through campus, finally we were getting close to the stadium, which was the finish line again.  I'd just like to point out that it's a sign of exactly how worn out I was that there's a picture of me walking - normally I'm super-OCD about making sure I'm running when I see a race photographer.  Not so much this race - it just wasn't happening for either of us.  We had to laugh as we turned the last corner on the track - we were so far behind the other runners that the finish line photographer had to pull his camera out of his bag to shoot us.  We were literally in the last dozen people to finish the race.  Another funny moment at the finish was when the announcer got a little confused with last names and announced that K and I were newlyweds!  Ummmm....no?  But it was literally a LOL moment that gave us that last little kick of energy for the finish line.

And we all did finish!!!  And that's all we could have hoped for with the way we were feeling.  Unfortunately, there was some kind of snafu with the bonus bling, and they didn't have enough of the Patriot's Challenge medals for all the finishers.  But they've assured us that they'll be sending us our third medals as soon as they get them in.  We grabbed more sandwiches and beer at the post-race bash and barely finished eating before the skies opened up on us and it started raining.  That lovely cloud cover we'd had for the last hour or so of the race had finally turned into something.  Fortunately it had held off until after the race, so it wasn't too bad. 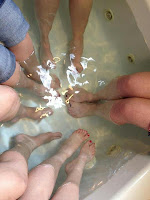 When we first arrived at the condo, we had made big plans for the giant corner spa tub in the master bathroom - it was perfect for an ice bath!!!  And of course, ice baths are better with friends.  And alcohol.  Although the plan for the afternoon was to head over to Busch Gardens to ride a couple of rides and take advantage of the free meal voucher, between the continuing rain and being pooped after two races, it just didn't happen.  We ended up hanging out around the condo and reminiscing about our race weekend.  Not a bad way to spend a rainy afternoon and evening.  Eventually we managed to leave the condo and had our first relatively healthy meal of the weekend - we totally did that backwards - oops.

Monday morning we were back on the road to D.C/Baltimore, and I caught my flight back to Texas that evening.  What an insanely awesome weekend.  I set a new 8K PR, and a new PW (Personal Worst) for the half.  Even with the personally not-so-great races, the wonderful opportunities to race with friends and get some new bling far outweighed the minor negatives!  The Run for the Dream race is a great one - I highly recommend doing it if you ever get the chance.  It is well-organized and well supported, and it has a great course.