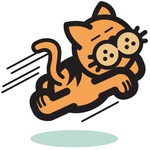 Today was my last "long" run before San Francisco, and it was...interesting...to say the least!  Since I was tapering and only doing 5 miles, I decided not to join the group (for several reasons: save gas, sleep later, no waiting around for them to finish) and run on the trail nearby.
So what's this about "cattitude?"  About a mile into the run, the trail squeezes between a row of houses and a creek.  As I'm running along, a big fluffy orange tabby cat darts out of the foliage around the creek and starts running towards me!  I figured he belonged in one of the houses, so I slowed down to let him cross the trail ahead of me.  Instead of crossing, he stopped right in my path and looked up at me like "ok, I'm here, now pet me!"  I'm a cat lover, but didn't want to stop, so I maneuvered around him and kept going.  Next thing I know, he's running ahead of me and has once again stopped in my path a few yards ahead, waiting for some attention!  We played leapfrog a total of 3 times before I guess he gave up on me - it was the funniest thing!  I can't help but wonder how many people stop and love on him that he's now perfected this routine?  I've seen plenty of wildlife on and around the trail over the years, but this was a whole new kind of interaction - too funny!
As for the run itself, I definitely didn't prep well enough for it since it was "just 5 miles."  I started out too fast, and got in a decent first 3 miles, but then the heat and humidity definitely started getting to me and I faded fast after the sun started rising high.  The last 2 miles really stunk - boo.
Oh well, it's done, and now San Francisco's only a week away!  The forecast for next Sunday is a high of 65 and mostly sunny - it's gonna be amazing running weather!

Other items of note from today's run: 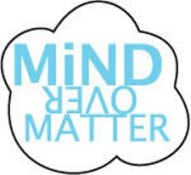 Yesterday's run was more of a test of my mental strength than my physical strength, as some long runs can be.  The group was only doing 7 miles (only 7 - you like that?), but I really needed to get in one last long run before San Francisco.  So I set my goal for 12 miles - 7 with the group and 5 on my own.
I met the group at 5am and we headed out, but somehow we got distracted and turned around too early - as we were coming back into the parking lot we realized our mileage was short!  So a small group of us decided to continue on and get in the planned distance.  As we were out on that short catch-up run, one of our PGL's remarked that it took a lot of determination and commitment for us to keep running and pass the parking lot where others were stopping.  Oh, how right he was!
After we finished the group run, I quickly hopped over to White Rock Lake where I had decided to get my final miles in - because if I was going to do it alone then at least I'd have a pretty run.  The only problem with the White Rock Trail is that there's not a lot of shade along the waterfront, and since it was 7am when I was starting, the sun was already out in full force.  There were also a ton of runners, walkers, and bikers out, so the trail was very crowded.  Since the loop around the lake is 9.3 miles, I decided to do a 2.6 mile out-and-back.
It was so hot and the sun was just draining my energy with every minute - I don't think I passed a single mileage marker on the trail (every tenth is marked) without calculating how far the run would be if I turned around right then.  But I pushed on, wanting to get my total planned miles, so I just kept reminding myself that it was as much mental as physical, and I could do it.
Then I got a much-needed boost when I was about a mile away from getting back to my car - a runner passed me and said "Good morning - looking good!"  I was stunned for a second, because I'm pretty sure that I looked awful at this point, but I really appreciated his comment.  So I told him "Thanks - you too" as he pulled away from me.  It's amazing how a few simple words can really give you that last edge to get it done - and I did - finishing strong!
So my last long half marathon training run is done, and the race is two weeks away!  Next week is a taper, and then we're there!  Yay!!!
Saturdays Runs: