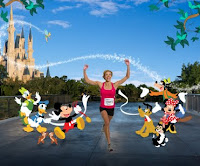 Life has been NUTS! So crazy, in fact, that I haven't had a chance to post about something VERY exciting! I am officially registered for the 2013 Walt Disneyworld Marathon!!!  My BFF is also registered for the marathon, and my dad is registered for Goofy (again)!  We've also made our hotel reservations for that weekend - so that makes it doubly real!

I am SO excited about this race.  It's the 20th anniversary of the WDW Marathon, so Disney is making a big deal about it - a new anniversary medal, a special surprise at Mile 20, and who knows what fun things they may have in store for us?

A bunch of my running friends are also signed up for this race, because of the significance of the anniversary year and new bling, including quite a few first-time marathoners!  As I will hopefully have completed MCM a few months before Disney, I don't really have a goal for the race right now, other than to have fun!  As a good friend of mine says: a marathon is like a mullet - business in the front and party in the back!  So I'm looking forward to having a good group of friends to "party in the back of the pack" with!
0 comments