Ramping Up and Amping Up 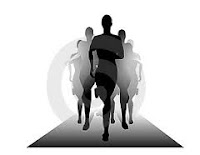 Today was a good day.  A small group of my Galloway Group friends that are also running MCM have been meeting here in the neighborhood to run the trails to ramp up to our first group run at the end of May.  Not only are we increasing mileage, but we're also amping up our run/walk intervals to increase our speed.

This morning we had 4 miles on the schedule.  And we bumped up to 90:60 run/walk intervals.  I was a little concerned about bumping up to the slightly longer run interval because after slacking off so much this spring, even the 1:1's I've been doing recently have been more difficult than I'd like to admit.  But we decided we'd take it very slow and easy and just concentrate on the longer run interval, not on our speed.

Thanks to the fun of running with friends, the miles went by fairly painlessly, and before I knew it we were done!  4 miles at 90:60 intervals - yay!  I even joined one friend in another short 1.5 mile loop to walk her dog after we finished.  As much as I wanted to just stay in bed this morning, it's always a good feeling when I'm done.
1 comments

Race Report: Another DNF ... This Time Closer to Home

Three weeks after successfully completing the Tinkerbell Half and eight weeks after my Disney Marathon, I was at the start line of the Inaugural Woodlands Half Marathon.  Why, you ask, was I doing this?  For lots of reasons:
What I hadn't counted on, however, was my lingering nasty cold/flu/crud (whatever it was) and my previously mentioned bad case of post-race blues after Mickey and Tink.  All of that led to me lining up in my start corral feeling less-than stellar that cool and damp morning.  I had even told my mom several times earlier in the morning that I really wasn't "feeling it" and that I should probably just be cheering.  But I decided that I could power through it and just finish - certainly not my best idea.

At Mile 2, I realized I had no business being out there on that course - with every run interval my chest would tighten up and send me into a coughing fit that I needed the entire following walk interval to recover from.  So I made the tough, but right, decision to stop.  I walked to the next water/medical station at Mile 3 and stopped.  Of course, I was so upset that I was stopping (with flashbacks of Donald 2010 playing through my mind) that I was crying and having trouble getting words out.  Which totally freaked out the medical team - they called for an ambulance for a female in respiratory distress!!!  I quickly pulled myself together and managed to convey that I was fine, did not need an ambulance, was just upset, but did need to get in the sag wagon back to the start.  Apparently there were some serious delays getting the sag wagons through, because I sat there for a couple hours - I even saw my Dad come through on his second loop for the marathon course...

Once I finally made it back to the start/finish line, I met up with mom just in time to cheer Dad on as he finished (and set a new marathon PR - 4:01!).  I was really bummed to not have gotten the cool finisher's medal and finisher's shirt, but I knew I'd made the right decision.  Plus, I knew I had R'n'R Dallas coming up in just three weeks, and didn't want to push myself to finish this one but screw myself for the next.

So that's the story of my second DNF.  Truthfully, it should've been a DNS (Did Not Start) but apparently I'm a little too pigheaded for that.  And hopefully, this DNF has helped me learn my lesson about starting a race when I shouldn't.
2 comments

When RAM Racing announced their newest race series, the Hot Chocolate 5K/15K, billed as "America's Sweetest Race," all of my running friends were abuzz with excitement.  Even I, not being a huge chocolate fan, found myself swept up in the enthusiasm.  So, my BFF Carrie and I both signed up for the 15K in Dallas, which was being held two weeks after Tink.

After we got home from Tinkerbell and "the crud" (as I have deemed it) continued to have an iron-fist-like hold on me, I started getting worried about the 15K.  Finally, I decided to see if I could switch to the 5K.  I sent the race team an email and they told me I should be able to switch at the Expo if there were spots available.  So I had my fingers crossed that there would be!

I drove down to Fair Park on Thursday afternoon, and was able to successfully switch races and pick up both Carrie's and my packets and jackets - yay!  As race weekend approached, the weather forecast for race morning looked COLD!  And, in fact, the night before the race, the RD sent out an email advising slower runners in the 15K to switch to the 5K (without penalty) to limit their exposure to the elements - crazy!!!

I had been coordinating with some of my fellow Galloway Group runners, and we all planned to meet up before the race and run together, so we managed to assemble ourselves within the corrals (which were a little halfhazardly put together) and start together!

There wasn't anything spectacular about the course - the area around Fair Park is not exactly Dallas' most scenic area - but it was fun to be running with my Galloway friends again after an almost 2 month break!  We ran 1:1 intervals and kept up a decent pace for the 5K.  After crossing the finish line, we headed straight back inside to warm up, because we were frozen!!!

So we picked up our post-race goodies, which included warm chocolate ganache for dipping, and hot chocolate.  I didn't care that it was a lot of chocolate, especially for me, it was WARM and tasted so good after running!  We sat inside, eating and chatting, and waiting for our friends who were running the 15K to finish.  Once Carrie arrived, we hung out a while longer while she relaxed and enjoyed the festivities, then we headed back to the car to go home.

Considering there had been some VERY negative reviews and press of the Hot Chocolate races around the country in the months leading up to the Dallas race, we were concerned about how it was going to turn out.  With the exception of the confusion in the corrals, it was ok - definitely nowhere near the clusters we'd heard about elsewhere - so that was good!

Surprisingly, I had a pretty decent finish time - considering my much slower paces in my longer races recently, and "the crud." All in all, it was a fun race to do once, but we probably won't participate again next year.  But if you want to do one, it's definitely worth doing once!