Run the Race Before You 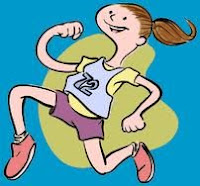 Starting down the trail this morning, I just knew it was going to be a good run.  I planned to do 5-6 miles (as a taper run before the Wine & Dine Half Marathon next week), temps were in the high 50's, and it was crisp and clear - a truly great morning for a run!
"A great morning for a run."  That thought sent my mind wandering...and ending up back at a place where I've been lingering the last 3 days - the forecast in Orlando for next Saturday night.  Now, of course a 10-day forecast doesn't usually closely depict what the weather actually ends up being, but now we're down to 7 days out.  It's getting closer, and they're refining the forecast.  Looks like it's going to be a typical "fall" evening in Florida - warm (low in the low 70's) and muggy with a chance of rain.  Definitely not my idea of ideal race conditions.  Yuck.
So as I set a fairly brisk pace on this glorious morning, I started to think about how these less-than-ideal race conditions might affect me next weekend.  Self-doubt and "what-ifs" started to pop in.  What I finally realized a few miles into my run was that there is nothing I can do about it.  My only option is to run the race put before me on Saturday night.  Sure I'll properly hydrate and fuel beforehand, and I have 19 weeks of marathon training behind me, but as I cross that starting line, that's it - I'll be there and have to deal with whatever the race conditions are.
As scary as that thought sounds, I was still buoyed by it.  After all - I was right.  I have done and will do pretty much all I can to get myself ready.  And the stuff I can't control?  Well - oh well!  I can't control it, so I'll just prepare as best I can and then roll with the punches.  I plan to have a great time running with old and new friends and knowing I'll do the best I can with the race before me!  And then have a great time at the after-party!!!
Today's Taper Run: 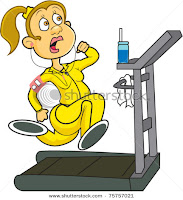 I did this past weekend's "long" run on a treadmill at the LAX Marriott.  Up at 4:30 and on a machine by 5:00.  Boring, right?  It wasn't as bad as it sounds.  I had 10 miles on my schedule, but really only had time for 9 before I had to stop to get ready to leave.  I split the run into 3 mile segments, just in case I needed to relinquish the machine to anyone waiting to use it (which I ended up not needing to do).  After each segment I took a super quick water & gel break, then got right back at it.  I can't say it was the most thrilling run I've ever done, but I've got to give props to the fitness center.
They had really nice equipment with plenty of each kind of aerobic machine, and every machine had it's own TV built in to it.  Didn't bring headphones?  No problem - they provided disposable pairs.  They had stacks and stacks of clean hand towels and several different sanitizing wipe stations to wipe down the machines when you were done.  There were several water coolers, including one full of ice water with lemon and lime slices floating in it for an invigorating citrus touch!  Feeling wiped out after your exertion?  How about a nice, chilled, Eucalyptus-infused washcloth?  Amazing.  To top it all off, they had trays of fresh fruit available for a post-workout snack.  My only complaint is that the facility was too hot - it felt like a sauna in there - especially once more people came in as it got later.
I was really pleased I was able to get in almost all of my scheduled mileage - I had been concerned about whether it would really be feasible on the road.  I guess it just goes to show that it's possible with a little determination and commitment to force myself to get up and going and get it done even while traveling.  Nice.
And after the run we headed to The Rose Bowl to watch UT beat UCLA!  It was an incredible football game for us.  Add in a day at Disneyland on Sunday, and it was a great weekend!
Saturday's Treadmill Run:
1 comments