Scary Moments for My Dad While Out Running

When I called my parents after finishing my run this morning, my mom was on her way to the hospital to meet my Dad after he'd called 911 while he was out running!  Hearing that, I, of course, panicked.
Turns out he's okay, thank goodness!  He was running 18 miles in high 70's temps with 95% humidity after flying back from Denver  late last night.  Apparently he didn't hydrate well enough for a long run (the altitude change probably didn't help either), and at mile 17.5 ended up feeling light-headed and nauseated, and his legs locked up on him.  He felt really bad, and it scared him enough that he called 911 from the trail.  The EMT's hooked him up to an I.V. and took him to Northwest Hospital because his blood pressure kept dropping dangerously low.

They observed him for a few hours, gave him two bags of I.V. fluids, and said all his bloodwork was normal.  He's been released now, and is still planning on going to the TxState football game this evening (in an air-conditioned box, thankfully), so he's obviously feeling better.
Scary moments, though.  We're all so grateful that he's doing ok now, and that nothing was really wrong except a little heat exhaustion and some major dehydration.
Here are my morning run stats:

Email ThisBlogThis!Share to TwitterShare to FacebookShare to Pinterest
Labels: medical

This morning the newscaster said that we had survived "the dog days of summer" - the hottest, most sultry days of the season - and that the intense heat was most likely over.   Granted we're not in the 100's anymore, but you can count on Dallas being in the 90's well into October - still pretty darn hot! 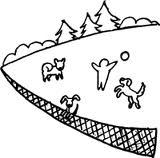 Speaking of dog days, the highlight of my run most days is going past the city Dog Park.  On the trail, I get to meet playful pups straining at their leashes on the way in, and pooped pooches dragging their heels on the way out.  Meanwhile, dogs of all sizes are frolicking off-leash inside the fenced areas and everyone looks so happy!  You can  just feel the positive energy, and can't help but smile as you jog past.  The doggie antics will even occasionally warrant a giggle - the last thing you'd expect from me while running!
So, with a lasting grin on my face from the memory of seeing a miniature daschund trying to wrangle a frisbee away from a golden retriever, I'm proud to report the following stats:
0 comments

2.5 miles into my planned 3.5 mile run, the clouds rushed in, the sky rapidly darkened, and the wind picked up.  Not a good sign - so much for that predicted 10% chance of rain!  Being out on the trail, I had no choice but to complete my run ASAP.  Literally just as I was finishing, the skies opened up and it began pouring.  Perfect timing - I couldn't have planned it better if I'd tried!  All in all, it was a good run:
0 comments

Email ThisBlogThis!Share to TwitterShare to FacebookShare to Pinterest
Labels: rain 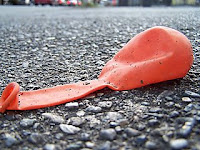 The gravel trail at The Hill Country Galleria is a 2.1 mile loop.  So I figured with a 10-minute warm-up walk, and a cool-down walk after my 3 mile training run, two loops would be great, right?  Wrong.
We hit the trail at 8:40am Saturday.  It was only 79 degrees, but with 90% humidity, and the sun in the sky beating harshly down on us, it felt way hotter.  Were we running or swimming?  Truly, the air was that thick.  I'm not making excuses, but I'm not used to running on a gravel trail, Austin's way more hilly than Dallas, and we forgot to eat before we left - not ideal conditions by any means.  After the first loop, and feeling miserable, I made the decision to cut the second loop in half and only do a total of 3 miles, including the warm-up walk.
At the end of the run I felt like a deflated balloon.  It's scary that I'm running a very similar course for The Purple Stride 5K in two weeks.  I went from feeling ready and excited for the race to feeling completely unprepared in 49 painful minutes: