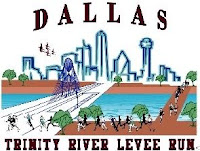 During the race this morning, as I reached the turnaround point for the people running the 5K, I had to fight the impulse to say "screw it" and turn around with them.  But I sucked it up and plodded on, knowing that I needed to get my 6 miles done today.  When I hit the 3-mile marker on the race course, I thought about those signs you see on apartment complexes that say "If you lived here, you'd be home by now" and couldn't help but have the same thought in relation to the race - if I'd signed up for the 5K, I'd be done by now.  But no, it was the 10K course I was charting...
And, wuhoo!  Just another 5K later, I was there, crossing the finish line, having completed my goal and feeling great.  I checked my Garmin, and WOW!  Even though I'd been "taking it easy" because I was worried about having the stamina to get the mileage in (since I hadn't been building like I should have been), I'd managed to shave 0:04:30 off my old 10K PR.  Awesome!
It was a fun, flat, race (although not the most scenic - mainly through the Design District). It's also the site of the annual competition between the DFD and DPD, so there was plenty of eye candy along the way...  The $10 registration fee (for DRC members) included a technical tee with the race logo.  After the race they had breakfast tacos, Krispy Kreme donuts, Clif shot blocks, fruit, water, and beer (I passed on the beer seeing as how it was 10:30am and cold) -  talk about major bang for your buck!  I definitely plan on running it again next year, and recommend it to others!
Today's Race stats:

March is going to be a month packed with races.  Three out of four weekends this month I'm running in something, starting this weekend:
I'm really looking forward to participating in each one since I'll be running with family and friends (although if I'm being honest, I'm only doing the TRL run so that I can fill an empty page in my running scrapbook before RnR [insert sheepish smile here]...)!
I had a good run tonight since it was the first chance I've had to run outside in quite a while!  Even with a lack of "speedy" running the last couple of weeks because of being sick and traveling, I still managed to pull out a pretty darn fast 3 miles - first time EVER that I've had an under 12 min/mi avg - woot, woot!!!  Granted it was just barely under 12, but hey, it's still under!
Today's stats:

Wow, what a weekend!  We took lots of pictures, but I haven't downloaded them yet.  Here's my super-condensed trip report: 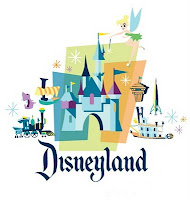 Friday: Arrived to stormy skies at LAX at 10:30am and, after grabbing lunch at IN-N-OUT Burger, headed west to see the beaches (Venice & Santa Monica), made a quick spin through Hollywood to see the Oscars prep, then headed to the hotel to change.  Went to the wedding rehearsal and rehearsal dinner, then back to the hotel to collapse - all the travel and the time change had really caught up with us!
Saturday:  Up early Saturday morning and headed down to the hotel gym to get in a couple miles (on the fanciest treadmill I have ever seen - you gotta love L.A.!).  Grabbed a quick brunch in the hotel cafe then leisurely got ready for the wedding.  Checked out of the hotel and headed to the church for pre-wedding pictures.  The pictures were slightly hampered by a 10-minute hail storm (crazy, huh?) but then the sun came out and all was fine.  The ceremony was at 3:30 with the reception from 5-10pm, then we drove down to Anaheim afterwards.  We made good time and checked into the hotel about 11:15.
Sunday:  Up even earlier on Sunday morning to drop a friend off at the Anaheim train station for her trip down to San Diego to visit other friends, then crossed the street to go to Disneyland when it opened at 8am.  We spent the morning in a surprisingly uncrowded park and got in almost all of our "must-dos" before noon (including getting a boat all to ourselves on Pirates - amazing!)  Since it was a Family Fun Weekend celebrating Mardi Gras, we split an order of Mickey-shaped beignets and a Mickey-shaped brioche throughout the morning inbetween rides.  Then we grabbed hand-dipped corndogs on Main Street for lunch and headed over to California Adventures.  We spent the afternoon and early evening riding rides and watching shows at DCA, then picked up our World of Color Picnics (yum) and watched the 8pm WOC show (spectacular!).  After WOC, we walked back over to DL to see the Wishes fireworks and finish up the last couple of Fantasyland rides and re-ride Big Thunder and Space.  Since we were (literally) freezing,  we decided to go ahead and leave at 11:15 and headed back across the street to the hotel.
Monday:  A super-early morning Monday to check out of the hotel, drive back to LAX, return the rental car and hop on a plane back to Texas.
Okay, maybe it wasn't all that quick of a recap.  Anybody notice a trend mentioned each day?  Not the late nights and increasingly early mornings..the food!  The crazy thing about L.A. is that the calorie content is posted everywhere - even on the "guilty pleasure" items - and no one even bats an eye when you ask for egg whites and fruit instead of hash browns...in fact, I'm pretty sure it's expected.  I think I found a pretty good balance between eating right and indulging in some signature L.A./Disney items throughout the weekend.
Since my mom is a native Californian, we took quite a few trips to DL when I was growing up.  It's only recently (the last 10 years or so) that we've been spending much more time at WDW than DL.  Before this trip I'd only been to DCA twice, so it was fun to see how much it's changed, and of course DL is always a great place to visit!
So it was back to the grind today.  I'm finally feeling normal again, and my cough is practically gone, so I figured it was time to switch back to my 5:4 intervals.  It was hard this evening, but I made myself keep going at my normal pace and push through the intervals.
Today's stats:
0 comments