So, it's been almost a year since I posted here, talking about New Year's Goals.  I'd like to tell you I met that goal of 500 miles in 2016.  But I know I didn't - I don't even have my total mileage to tell you how close (or how far away) I came.  My year was that...interesting.

I ran two halfs in the spring, and skipped a couple races throughout the year (sometimes DNS is the best decision you can make).  I surprised myself and ran an "official" Disney time (sub-3:30) at the Star Wars Dark Side Half in April after committing to my training plan and taking off almost 20 lbs, so that was awesome. 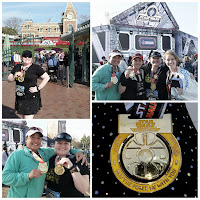 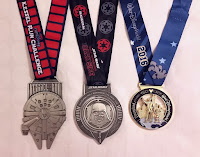 I had surgery in May (hello hysterectomy, goodbye uterus & all of your complications!) and despite my best intentions of not letting pounds pile on during recovery....they crept back on, and brought some of their friends with them.  Sigh.  And having to defer a summer race I'd been looking forward to was not awesome, but at least it's giving me something to look forward to next year!

The absolute highlight of my year was the birth of this little dude in early June!  My nephew is the cutest thing EVER, and I'm loving my new role as Aunt Jenny, and the ability to spoil him like crazy (and then give him back, lol)!!!! 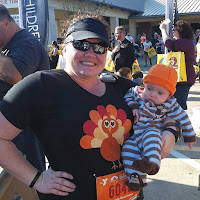 The real downer of the year is that my family has been dealing with some pretty serious struggles throughout the fall, and all the stress and associated travel seriously impacted my training (basically non-existent) and all the stress eating packed on even more pounds than before!!!  Insert even bigger sigh here.

After watching/cheering on friends and family struggling through the Marine Corps Marathon in October, I found some new motivation and decided to turn around my own struggles and work towards my personal goals again - I wasn't waiting for New Year's to set them this time around.

I'm glad to say that I'm back down to what, at one point, had been my "all-time-highest-weight-ever" (before I started running and lost weight, then put it all back on), and I've had some really GREAT runs recently.  Which probably means I'm due for a stinker of a run soon, but it's amazing how good you feel when you've been struggling for several years and finally can feel yourself turning a corner. 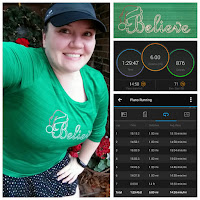 2017's got some BIG plans coming up: I'm already registered for 5 halfs, and that will mean 4 new states, and lots of fun trips with my running peeps and my family.  So here's hoping I'll be able to maintain the momentum and motivation I've gained the past couple months and translate those into a really great year!
1 comments