I am the girl who in high school took golf to get out of my P.E. requirement, and who was forever grateful that my engineering degree didn't require any Phys Ed credits to graduate.  To say I'm not athletic is...a huge understatement.

Most of my adult life I shunned any form of exercise.  In college I would occasionally go on weight loss kicks where I would work out for the calorie burn and would hit the gym for the elliptical and stairmaster machines as well as the weights - but I wouldn't go near the treadmill.  The treadmill was for those intangible, abstract, almost mythical creatures labeled "RUNNERS."

So when my BFF first approached me about running a Disney race in 2006, I thought she was crazy.  At the time I was living in Florida, so I told her that I would cheer for her if she wanted to run, but there was no way I was going to be out there running with her.

Well, life is unpredictable, and I ended up being transferred back to Texas, and with the craziness of the move I couldn't make it to see her first race.  Finally, in January 2008, I was able to travel to Florida with her and chEAR while she ran her first marathon.  At some point during that race, while standing on the sidelines watching those thousands of "normal- looking" people accomplish such an amazing feat, I realized that perhaps, if my BFF could run a whole marathon, that maybe, just maybe ... I could train for, and complete, a half marathon.

So the wheels started turning.  My Dad had been running a couple of miles every morning for as long as I could remember.  What were the chances that I could talk him into joining me in training for our first long-distance race together?  So I broached the subject, and a few weeks later got him to say "yes."  We both signed up for the Walt Disney World Half Marathon in January 2009, and it has all snowballed from there.

I started running using the Galloway Method.  I'm still a big fan of run/walking for both training and racing.  I started using a 10 seconds running to 2 minutes walking ratio and slowly but surely worked my way up to consistenly running 1:1's (1 minute running to 1 minute walking).  That 1:1 ratio (now 30s:30s) is still where I am most comfortable, although I did the majority of my marathon training in 2011 at 2:1s.  I am by no means fast, but I can cover the distance. 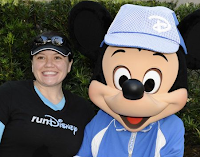 So what's the deal with Disney?  I admit it - I'm a bit of a Disney fanatic - mainly when it comes to the Disney Parks around the world - I LOVE to visit them and get swept away into the magical worlds the Disney storytellers create.  My parents indulged my love of Disney as I grew up and we took frequent family vacations to both Disneyland in California and DisneyWorld in Florida, and we even managed to make two trips to Disneyland Paris when I was a young adult.

I used to say that the only place I was willing to "run long" is at Disney, but over the years I have branched out to run in other places, and "long" took on a whole new meaning - as I now have three full marathons on my accomplishments list!

In 2014, I decided to tackle the goal of "50 in 50" - fifty half marathons in fifty states - at least one half in every state in the U.S. - and I'm slowly but surely ticking states and races off the list.  For me, racing is a great reason to travel to different parts of the country, meet up with friends and family, and to see the world in a new way - from the road, on my feet.  :-)